The Cascade boys swim team found success at the Sectional Prelims. The team has overcome several setbacks this season including a team wide 14 day covid related quarantine in January. The 200 Medley Relay team of Caden Potter, Cason Vonehrenkrook, Dane Market and Ethan Davis posted the 6th quick time to advance to the A finals. In the 200 Free Aiden Gilliam, Emory Lopossa and Evan Franklin each had great swims. Zac Marcum matched his season best time in the IM, while Cason Vonehrenkrook had an outstanding swim in the IM dropping 15 seconds to finish just outside the top 16 cut. Dane Market cruised to a #3 seed for the A finals and is positioned for a great swim on Saturday.

The 50 free is the lightning round of the prelims and this year was exceptionally fast. Jackson Bolinger,

Noah Bush, and Dustin Mynatt each had good swims with drops in time but all finished outside the top 16. Zac Marcum had a big 9 second drop in the 100 fly and Caden Potters dropped a second and made it into the top 8 and the A final with a #7 seed.

Dustin Mynatt, Ethan Davis and Jackson Bolinger each dropped time in the 100 free with Jackson making the B finals with a 15th place finish. The 500 Free event saw Emory Lopossa and Evan Franklin both have good swims and drops in time. The 200 Free relay of Evan Franklin, Ethan Davis, Jackson Bolinger and Noah Bush finished outside the top 8 and will swim in the B final on Saturday.

The 100 backstroke was a good event for the cadets as Aiden Gilliam, Ethan Davis and Caden Potters all dropped time with Caden advancing to the A final. The 100 breaststroke also worked out well for the cadets. First year swimmer Owen Myers dropped 7 seconds and Freshman Cason Vonehrenkrook dropped 3 seconds. Dane Market swam a great prelim and is the #2 seed by .01 of a second. This will be a great event to watch on Saturday.

The evening ended with the 400 relay team of Caden Potters, Dane Market, Jackson Bolinger and Evan Franklin posting the 5th quick time to make the A finals. Overall the cadets had 14 personal best times, 6 A final entries and 2 B final entries. 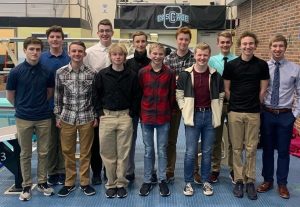